I’d like to start this blog post with a bit of honesty and a personal story…  November didn’t go as planned. Last month, I set off for NYC with a big smile on my face. I was part of the Fohr Freshman Class – my big break in the big apple!! I was meant to be spending 5 days networking, learning, creating content, and generally immersing myself in the life that I had so often dreamt about after watching it in films. Little old me would be following in the footsteps in so many of my heroes as I headed to the ‘concrete jungle where dreams are made’.

However, things don’t always go as we expect them to. To cut a long story short, I must have caught Norovirus when I was on the plane from London to New York. I spent 3 days crying in a hotel room, being very, very sick. Physically, it was hard, yes. But mentally, it was on another level. I was distraught. It’s taken me a few weeks to be able to refocus and re-motivate myself, and it’s understandable why.

We all go through times where our expectations aren’t met, or where we feel like life has given us a raw deal. But what should we do when things don’t go as planned? Here’s what I suggest.

Allow yourself time to grieve… but only a little.

Feeling upset is okay. Feeling upset to the point that you’re on your fifth tub of Ben and Jerry’s in two days and your hair has been 90% dry shampoo for the past two weeks is not. Set aside an amount of time to grieve for your lost opportunity – from a couple hours to a couple days, depending on how upset you’re feeling. Whether it’s a break up, not achieving the promotion you were hoping for, or even just not getting to adopt the puppy you wanted (this happened to me a few months ago!) – you will have been envisioning the things that will happen in your life from this opportunity. It can feel like suddenly your future is ripped out from under you, and it really hurts!

Despite what we may see on social media, this happens to everyone. Every campaign you see me post, there’ll probably be three opportunities that I didn’t get selected for. For every great workout video you watch, there’ll be an equally great day spent on the sofa. Behind every hit Ariana Grande releases, there’ll be so many verses that didn’t make the final cut.

You’re not the first person something like this has happened to… and you won’t be the last. So, stop playing the blame game and remember that this is just a (really crappy) part of life.

Enjoy what you have now.

I’m sure the missed opportunity was great… but had you really thought it through? It always helps me to take some time out to think about the potential negatives or constraints that the opportunity would have had. We can so often ignore our worries about a situation when we’re excited – use this time to think of some benefits of your current situation.

For example:
Yes that promotion may have seemed appealing, but are you ready for the extra hours you’d have been expected to work? Take a few days to enjoy the freedom that your current role allows!!

And I know, I know, you thought that he was THE ONE… But he said that pineapple doesn’t belong on pizza.* You don’t need that kind of negativity in your life! Have a girls night out and enjoy life without worrying about ordering a plain ol’ margherita pizza at the end of the evening.

*I don’t actually enjoy pineapple on pizza, but you do you hun.

Focus your energy into a new project.

What’s something you’ve always wanted to do but you’ve been too afraid of? Writing your first novel? Trying stand up comedy? Sky diving? GO DO IT.

For me personally, what holds me back sometimes is the fear of failing – and the embarrassment that comes with it. Well, imagine telling thousands of people that you’re going to New York for a once in a lifetime opportunity – and then having to explain that you actually just spent three days throwing up and had to fly home early. Yeah, it sucks. Yeah, it’s embarrassing. Yeah, it’s a little awkward. But then, suddenly, it makes running around London in a red ballgown seem like a casual walk in the park!!

Have a change of scenery.

I always find travel so invigorating and energising. A new city to explore always takes my mind off things when life doesn’t go as planned. Travel can be expensive, so why not jump on a bus or train to a nearby city and check out their Christmas decorations, or look for local Christmas markets instead?

Speaking of travel, I do have to take a moment to mention this STUNNING Mickey Mouse case by American Tourister which I was kindly gifted for my NYC trip. It’s the perfect cabin bag size and is surprisingly roomy! The only issue is, I feel like this case really needs to be taken to Disneyland… Anyone fancy an adventure? 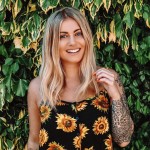